Peter and I were invited to attend a Derby party Saturday night.  Unfortunately, our sitter had a family emergency of her own, so we weren’t able to attend.  Despite that, though, I was determined to make my hat nonetheless, and I could always wear it to church.  So, this week’s blog post will be showcasing my non-soapy creativity. 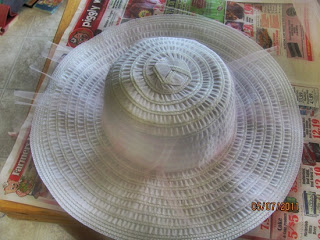 I started off by placing whisper pink tulle over a white hat I’d bought.  I was originally going to put silk gerbera daisies in raspberry and light pink around the brim with some feathers thrown in for fun. 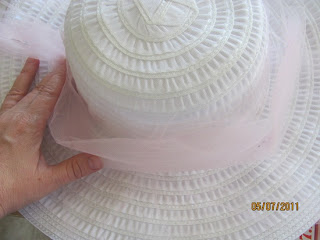 After stitching the tulle in place, I created a little poof of tulle to fill in around the crown.  This would provide a nice backdrop to the flowers. 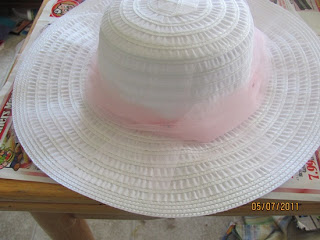 All the tulle is now in place.  Now it’s time to figure out the placement of my showcase flower (a large gerbera daisy-type number) and perhaps some feathers.  After all, what’s a Derby hat without feathers? 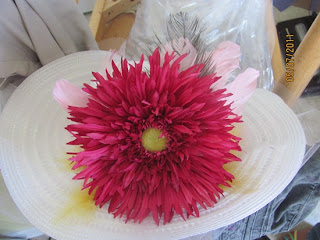 This is the tentative placement of the feathers and the flower.  Don’t you just love that huge, funky flower?  My older daughter suggested the yellow feathers should go into the arrangement, too, claiming they’d look good with the flower, since they match the center.  She has such a good eye, doesn’t she? 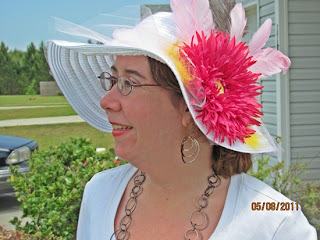 This is me showing off my new creation (of the non-soapy variety).  The dark feather tied it nicely to my white shirt and brown-and-white skirt.  It wouldn’t have mattered; I’m bold enough to wear a hat regardless.  I wore it to watch the Derby at home (and I would have lost if I’d placed a bet, unfortunately), then wore it to church on Sunday.

Did you watch the Kentucky Derby?  Were you pleased with the outcome?  If you watched it, what did you do special ?

Image via WikipediaWe spent yesterday visiting with my parents, paternal grandparents and aunts.  It was a lovely visit and well worth the drive there and back.  My grandpa served in the Army during WWII, and it’s only been in the past few years that he’s really begun to speak of that time in his life and to share his pictures and memories.

Yesterday, he had Grandma bring some of his treasures out to show me – a letter he sent to her in 1945, some pictures and some centavos, the Japanese-printed currency in the then Japan-occupied Philippines.  He told me that the Japanese had introduced this currency when they went into the Philippines, but once the war was over and Japan was ousted, the money was worthless.  Citizens would throw it out into the streets and soldiers would pick it up for souvenirs.  Grandpa has nearly 200 centavos, their monetary worth likely equal only to the paper on which they’re printed.

Grandpa went on to tell me that, when the U.S. troops went into the Philippines, their primary objective being to liberate them from Japan, they took the new Philippino currency in with them.  Go back and read that again.  It gave me pause.  Do you hear what he said?  I looked at Grandpa and said, “There’s a lesson for small business in there,” and the lesson is this:  March forward as if you know you are going to succeed.


Why in the world would the U.S. Army have carried all this newly minted Philippino currency with them if they didn’t have utter and complete confidence that they were going to succeed in their mission?  Obviously, they wouldn’t have.  It would have been a waste of paper to print it and just excess baggage to carry.  When Grandpa’s unit entered the Philippines, they were going in to win.  Not try to win, not negotiate with the Japanese for more favorable conditions for the Philippines, not lose, but to WIN.

This is how small businesses should drive their businesses – like a liberating army that is going to win the battle.  Of course, there will be set-backs.  Some American soldiers were injured, captured or killed during the Pacific War of WWII, including Grandpa.  However, the divisions, squadrons and platoons kept advancing, kept driving the Japanese back.  It was this steady forward progress that enabled the U.S. to defeat Japan.

This same steady forward progress helps small business be successful.  Like most small business owners, I have had set-backs.  I have made mistakes… and I have learned from those mistakes.  I have lost some squirmishes – made business deals that ultimately weren’t beneficial, was poorly organized for shows and forgot to ship a customer’s order.  Like some soldiers do, I’m sure, I’ve also wondered what the crap I was doing, why did I want even to go on, why didn’t I just give up.  Then I look at my daughter and young apprentice who has fully embraced soapmaking and running her own segment of the business, and my husband who really likes making swirled soaps and think, “No man left behind!”  They’re counting on me to keep us motivated and driven.

Pain is weakness leaving the body.