We, of course, want to use safe cosmetics.  I can agree that we want to avoid certain things:

So why am I so opposed to the Safe Cosmetics Act (SCA), whose very aim is to ensure cosmetics are safe for consumers?  Short answer…  The SCA won’t necessarily make cosmetics safer for consumers and it’d put me out of business.  Longer answer…

Now, that’s just all that’s in water, nevermind the 5-50 other ingredients (with all their components) that might also be in the product.  Determining these trace components will be time-consuming and expensive for the small manufacturer.

The majority of cosmetic micro-industrialists practice current Good Manufacturing Practices (cGMPs) as determined by the FDA.  We have our water-based products tested for safely and preservative efficacy, and we started making these superior products because we wanted to provide consumers with more natural, greener, American-made products, because we’ve used them and love them!  Probably all of us only test on two-legged animals (that’s what friends and family are for), so we don’t harm animals in our manufacturing, either.

What can you do to help us?  You can start by signing the petition we have going on to oppose the Safe Cosmetics Act.  We’ve gotten over 2,000 signatures in 48 hours!  How’s that for positive reactions from people who want to preserve small business and maintain their right to buy artisan soaps and cosmetics?  Second, please go to Open Congress and register your opposition to the bill.  There’s even a handy link there you can use to contact your representative to tell him or her that you oppose H.R. 5786, the Safe Cosmetics Act.  Third, spread the word.  If you’re posting about this on Twitter, please use the hashtag #OpposeSCA.

For more information, go to http://www.opposesca.com/.  Thank you so much! 🙂

I am normally very intentional about not tying any of my political views to my business, but us small business owners who make cosmetics could be in serious trouble, so I want to get the word out for you to support us and am going to try doing so in the most nonpartisan way possible.

What’s the deal?  Reps. Jan Schakowsky, D-Ill., Ed Markey, D-Mass., and Tammy Baldwin, D-Wisc. introduced to the House the Safe Cosmetics Act of 2010 this afternoon.  Concordantly, the Campaign for Safe Cosmetics (CFSC), which is backed by some large tax-exempt organizations and some Hollywood celebrities (particularly those with their own cosmetic lines) has released a video today filled with misinformation, untruths and generalities in order to convince the trusting public that cosmetic manufacturers are filling cosmetics with cancer-causing ingredients.  This is simply not true.

A little history…  In 2008, the FDA Globalization Act 2008 was bandied before a congressional subcommittee.  This act, which addressed primarily food and drugs, arose after a spate of salmonella-tainted peanut butter issues and after lead was found in toys imported from overseas, namely China.  (The CPSC – Consumer Product Safety Commission – dealt with the toys issue in a way that put hundreds of artisan toymakers out of business.)  There was a small section – very small – in the Act that required cosmetic manufacturers to register with the FDA (for a fee) and further, required them to file every formula with the FDA.  The registration fees were as high as $12,000.00 annually, and having to file formulas would have resulted in more time dealing with paperwork than in actually driving a business.  (Even changing an oil for another oil would have necessitated filing the new formula documentation.)  When the draft of this Act was before this subcommittee, they had NO idea that there was this cottage cosmetic micro-industry that the passing of the FDAGA2008 would decimate.  Thanks to the tireless efforts of many in our industry, the draft was changed in 2009 and passed so as not to affect us.

In March of this year, Colorado representative Dianne Primavera led a move backed by Skin Deep to ban all ingredients with any toxicity at all from cosmetics, with no regard to dosing.  Olive oil, cocoa, and some essential oils all contain trace amounts of toxins.  What this proposed law would do was prohibit all cosmetic manufacturers in Colorado and all those shipping to Colorado from using any of these “toxic” ingredients.  Yet, the amounts of olive oil and cocoa that the citizens consume in food are far greater than what would be in your average cosmetic.

And now it’s looking like we have still more legislation before us with its roots in fear-mongering and ignorance.  Correct me if I’m wrong, but wasn’t one of the campaign “hot buttons” the last election “small business” with tax breaks for us small business owners and “promises” from Washington to help drive small business, recognizing our sizable contribution to promoting local business, promoting American made products and stimulating the local – and ultimately the national – economy?  And now, with the Safe Cosmetics Act of 2010, the very body which swore to protect us could conceivably bury us small business owners in astronomical fees and mountains of paperwork.

Additionally, the demolition of small cosmetic businesses will eliminate that option from peoples’ buying choices, making it nearly impossible for them to buy high quality artisan cosmetics.  The ruination of small local cosmetic businesses also eliminates them from the economic landscape, forcing people at the local level out of jobs, which in turn adversely affects their buying power (no income means much less money to spend locally) and increasing unemployment.  Small business owners of all breeds (not just us cosmetic manufacturers) work so that we can support our families and our communities, which we feel is far better than being unproductive leeches of an already overburdened welfare system.

Please support us and help us keep our own businesses intact, as well as helping us as we support our families, communities and local economies.  I reiterate Donna Maria Cole Johnson’s question on her blog:  What are you willing to do to make sure your representatives live up to their promises to support small business owners?

The Sunday after Mother’s Day, our six-year-old daughter told us on the way to church that she was ready to say the sinner’s prayer and invite Jesus into her heart.  She’d been grappling with this decision for a few months by this point.  At the end of the service, her daddy and I knelt with her at the altar by the wooden cross that stands over our church’s Open Door service while she said the sinner’s prayer and asked Jesus into her heart.  She wrote this soon after. 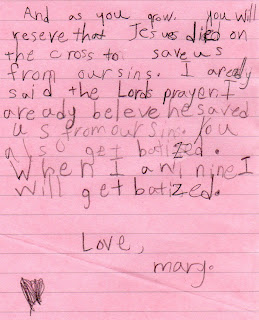 Last Wednesday my baby and I drove down to Southport to meet with a potential wholesale customer and to deliver some soap samples to her. While we were there, we took the time to walk around and visit some of the other shoppes at Olde Southport Village, a charming collection of cottage shoppes. I noticed a tea shoppe and tea room there, and thinking of a good source for Christmas presents for my tea-loving aunts, as well as a nice afternoon trip for my older daughter and me, I popped in. A few minutes with the shoppe owner, Jan, and we were talking private label tea soaps. I assured her it could be done, but it wasn’t likely that the scent or color of the tea would remain in the soap, though any beneficial properties of the teas would. She gave me three teabags – green, chai and Earl Grey – to try and soap.

I went back home and immediately hopped online to see if I could find these scents and got lucky. I dared to try another supplier for some of these scents (always a little nerve-wracking), and they came today. I’d brewed the teas and chilled them, so when my fragrances came, I was ready to go. This afternoon, I whipped up four 6-ounce bars of soap, three using each of the different teas and one with water, and all four with different fragrances – green tea, chai tea, Earl Grey and white tea (the one with water). What a thrill to do a soapmaking blitz like this, and how exciting it was soaping with both a new medium (tea) and new, fantastic smelling fragrances!

These are the soaps freshly poured. 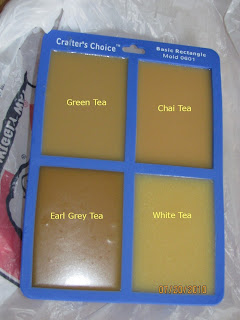 Being the oh, so typical soapmaker, I had to peek a few times during the process.  Imagine my surprise when I saw that the soap was gelling and looked like this! 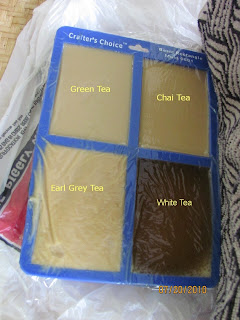 Look at how dark that White Tea soap is in nearly full gel!  Unreal!  I peeked about two hours later, and the Chai Tea soap was also pretty dark.  I predict that at least three of these soaps will be cream, and one might be tan, depending on how much vanilla is in it.

So, that’s my excitement for the day.