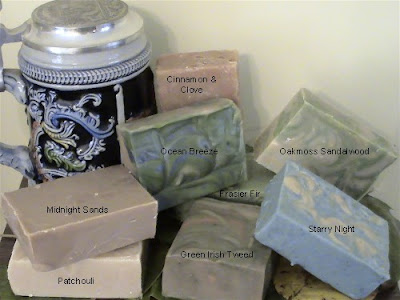 I’ve talked about them for ages now, it seems, and I know everyone’s waiting for a peek.  They are the beer soaps.  I first debuted them at Onslow Oktoberfest, held in Jacksonville a few weeks ago.  They didn’t sell great, I’ll confess.  We only sold three bars of them , but considering how slow traffic was that day, I can be satisfied with that.  Peter had made up a batch of soap using Guinness beer and scented with Green Irish Tweed, a delicious, totally yummy Creed dupe that smells like sexy man.  The soap was supposed to be cream with 2-tone green and bronze swirls, but it never went completely cream, instead fading out just to tan.  With the great scent and the unintentionally camo-inspired colors, I just knew that one would sell the best.  I even told Peter that when he fretted over the colors not turning out quite right.  Two of those three bars were of that soap.

While we were at Oktoberfest, people would see the sign for my beer soaps and laugh or turn their noses up.  “Ewww, who’d want to smell like beer?” they’d ask.  Well, one guy did; he specifically asked me if I carry beer-scented soaps.  Then those who’d get hooked by their own curiosity would head towards the display and pick one up to sniff.  Inevitably, they’d go straight for the Patchouli.  Patchouli is a “love it or hate it” fragrance, and the majority of people fall into that latter category.  Of course, from there they’d turn their noses up, put the soap back on the display, then walk on.  Those who dared to sniff the rest of my soaps would get hooked.  As I mentioned before, I sold two of the Green Irish Tweed and one of the Starry Night soaps (Starry Night is the blue one in the picture).

So what’s the deal about the beer soaps?  First of all, they don’t smell like beer.  By the time they get to usable bar form, all the beer smell is gone, leaving behind just the delicious fragrance I add to it.  So, what’s the point?  The hops commonly used to give beer its distinctive flavor are used in herbalism for skin and hair care.  Infusions and extracts of hops help clear up dry skin and acne-prone skin.  In hair care, that same moisturizing property helps reduce the appearance of dandruff.  Bottom line, these soaps are fabulous!

Those soaps have a new, temporary home down in Southport.  There’s a specialty shop down there called The Grape and Ale which specializes in wines and beer.  They offer wine tastings and themed arts by local artisans.  And currently, some of those themed arts include a soap display of my beer soaps.  Keep an eye on this blog for a picture of my display.

Simply put, we’re fanatical recyclers.  Everything from the usual milk jugs and aluminum cans to shampoo bottles, deli containers, styrofoam cups and buttery spread tubs…  If it’s got that triangle on it, it’s going in the recycle bin to be put out by the curb on trash day.  For some reason – maybe too many episodes of CSI? – I find myself wondering what someone would think if they went through our recyclables.  BoJangle’s cup, deli salad container from Piggly Wiggly, 20-ounce Mountain Dew bottle, beer bottle, Everclear bottle, Suave For Kids conditioning shampoo…  Hold it!  Everclear bottle???  I mean, a beer bottle isn’t that big a deal; many people drink beer (I just don’t happen to be one of them).  But Everclear?  We’re talking 190-proof, pure grain alcohol that’s illegal in many states.  And yet, my husband doesn’t drink more than the occasional glass of wine or rare beer, and I haven’t drunk (drank?) any alcohol in at least a year.  So what in the world am I doing with a Corona bottle and an Everclear bottle in my recycle bin?

Why, to make soap, of course!  Yeah, I’m sure that’s the FIRST thing people would think if they happened to catch me tossing an empty beer bottle into the recycle bin early this morning.  Uh huh… Riiiiiiight!  I’ll be telling you more about these amazing soaps in more detail – complete with pictures, of course – in the coming days.  I can’t say a whole lot about what I’m planning to do with that Corona that’s currently going flat in the garage; it’s too close to Christmas for that.

I can tell you a bit about the Everclear, though.  I originally purchased this last year with the intent of making hand sanitizer and sinus relief stuff.  Hand sanitizer’s a drug, so I had to stop production of that, and the sinus relief stuff was getting expensive with the amount of menthol crystals I was having to use, making it nearly cost-prohibitive.  So, for the better part of a year, this bottle has been sitting in my soap cabinet.  This morning I woke up, fed my baby, started my coffee, and while I was putting my breakfast together, I decided I wanted to try making transparent soap.  Yeah, just like that.  I grabbed my book and reviewed the directions and got started soon after breakfast.  Making transparent soap starts as a basic hot process method, but the addition of PGA helps the gelled soap become liquid once more.  I used all that I had left, which is why the bottle’s now in my recycle bin.