Last month, I got this wild idea to make coffee cup soaps and coffee cake soaps. I would package them together and call it a “Coffee Break.” It was something of an adventure, because the idea included actually moulding the CP soap in coffee cups. When moulding CP soaps, it really helps to use something flexible or something out of which the soap will come easily. Usually I use slab or box moulds – lined – and I can pull the soap out by the liner. I didn’t want those odd lines in my soaps, so I didn’t line the cups. Instead, I greased them heavily with Vaseline (soapmakers’ trick) and then poured the soap in.

The soap is a delight. I used coffee in the water phase and a yummy Coffee Bean FO for the scent. It’s a great wake-up, and the soap itself is very moisturizing and skin-nourishing. I finally got the soaps out of the cups this week. They’re a bit soft, but I’m confident they’ll harden up nicely.

Well, you can’t very well have coffee without coffee cake, right? I made the coffee cake soap a few weeks ago and scented it with Cinnamon Coffee Cake fragrance. It really does smell good enough to eat. Here’s what that soap looks like… 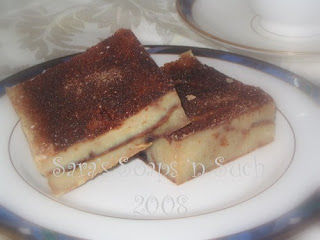 It’ll be a week-and-a-half before I even think about packaging these, as I want to give the soaps the maximum amount of time to cure before I get them ready to sell. The price will be dependent on the final weight of the soaps, but figure that each coffee cup yields two bars, and each set will come with two bars of the coffee cake soap, so that’s like getting 4 bars of soap in each set. These will make great gifts for the coffee lovers on your list!

In this post, I’d talked about how God rebatches us. I was talking earlier today to a faithful Christian man (my former stylist at Sheer Bliss), and was telling him about that entry on rebatching. Michael said, “And you keep your hand on the soap the whole time, just like the Master does us.” Excellent point and a connection I hadn’t made before. I thought more about it on the way home, and I thought also of the one time I don’t have my hand on the soap, and that’s when it’s in the oven cooking. However, I don’t leave it alone. It’s not like I pop it into the oven and go to bed or trot out to run errands. Nope, I stay close to the oven where I can use my nose to make sure it’s not overcooking and check on it every so often. I stir it and make sure it’s fully gelling, too. So, even though my hand’s not on it, I’m still right there with it, just as God’s still with us, even through the entire rebatching process.

There’s just something about this time of year that makes me want to be creative – way beyond the usual soaps and body products. It’s at this time of year that I want to sew stuff (even though I don’t sew), or knit scraves (don’t knit), or create these great Christmas centerpieces that’d make Martha Stewart weep with envy. I indulged my creative side yesterday, taking a little break from the frenetic soapmaking and lotion making of the past month. I made salt dough ornaments with cinnamon in them. They were surprisingly easy to make, and I made them in shapes that are going to be fun to decorate – snowman, teddy bear, tree, mitten, heart, and, of course, Gingerbread Boy and Girl. While they cooked, our entire townhouse had this amazing cinnamon, “Home for the Holidays” scent to it.

In the interest of getting something accomplished – and I do still have a business to run – I made some Smelly Jellies (new goodie I’m adding to my product line) while my ornaments were cooking. For these, I chose such delicious holiday scents as Orange Pomander, Cinnamon & Clove and Frasier Fir. Can you just imagine it? Picture if you’d walked into my house, with the scents of cinnamon, clove, orange and fir greeting you as you opened the door. You’d have expected to see a tree in the corner and spiced cider simmering on the stove. I’m glad I did these, because the cinnamon was such a comforting scent that it helped me relax for a bit and experience a bit of calm in the midst of the “Silly Season” chaos.

I’ll post pictures of the ornaments when they’re painted. Some of these we’ll give away, and perhaps I’ll sell a few. Who knows? They’re going to be fabulous on a tree, because when the heat from the lights hits them, it’ll release the cinnamon smell. I might have to hang one in my car. What better way to stay calm during traffic?