My six-year-old daughter was home from school this past Monday, getting over a stomach bug.  I’d given her a soapmaking kit I got at the HSMG Conference the previous week and told her that she could now fly almost-solo in making her first soap.  After the squeals and hugs and “Oh, Mommy, you’re the best!”s, she asked, “But not with lye, right?  Because I’m not old enough to do lye soap.”  Nope, she’s not; she’ll start out with melt-and-pour, just as I did.
I cut up the soap block for her and showed her how to melt it in the microwave.  First, she added the color, a gorgeous royal purple.  (Don’t ya just LOVE that tiny little pipette?) 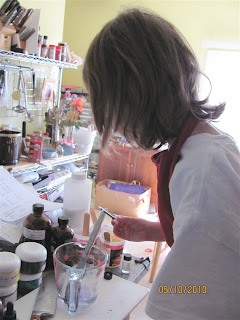 Then she added the fragrance, which is a totally scrumptious Passionfruit Rose fragrance oil.  (I later found out that it’s also lip safe!  Woohoo!)  This scent reminds me of the rum punch my husband and I enjoyed on a sunset sail on our honeymoon. 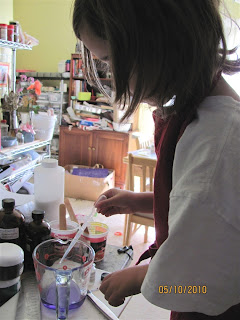 Then she stirred it gently. Then came the pouring.  The pots of colorants and glitter are testimony to her soapmaking ambitions for this day! 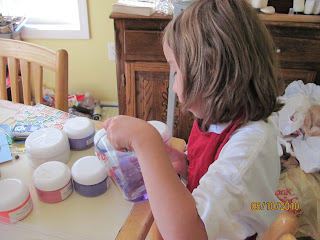 And after patiently waiting for them to set up, here’s the final result.  The purple one is the one she’s making here.  The pink one is the same scent and poured into a mould I’ve had for a while. 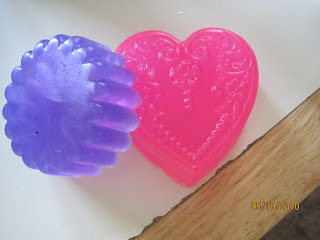 Question:  What’s a good sick day activity you’ve gotten to share with your child?
Soapmaking kit provided by Brambleberry.  The soap and colorant used in the heart soap came from Wholesale Supplies Plus.

This site uses Akismet to reduce spam. Learn how your comment data is processed.